Enlisted at Heston, Middlesex, on the 11th of February 1853.

Wounded in action at Balaclava, and "sent on board ship without having been seen by the Surgeon."

Extract from theNaval and Military Gazette, 8th of December 1855:

"The Commandant of the Chatham Garrison has received from Her Majesty the photographic likeness of John Daniels and Robert Evans, which he is presenting on Wednesday next to these two young men, who are now in Fort Pitt. The former had 13 pieces of his skull taken away and the latter lost a leg under distressing circumstances."

(There is a copy of this photograph in the 13th Hussar file, the original of which is in the Royal Library at Windsor.) Evans is depicted in this with John Daniels of the 55th Foot.) 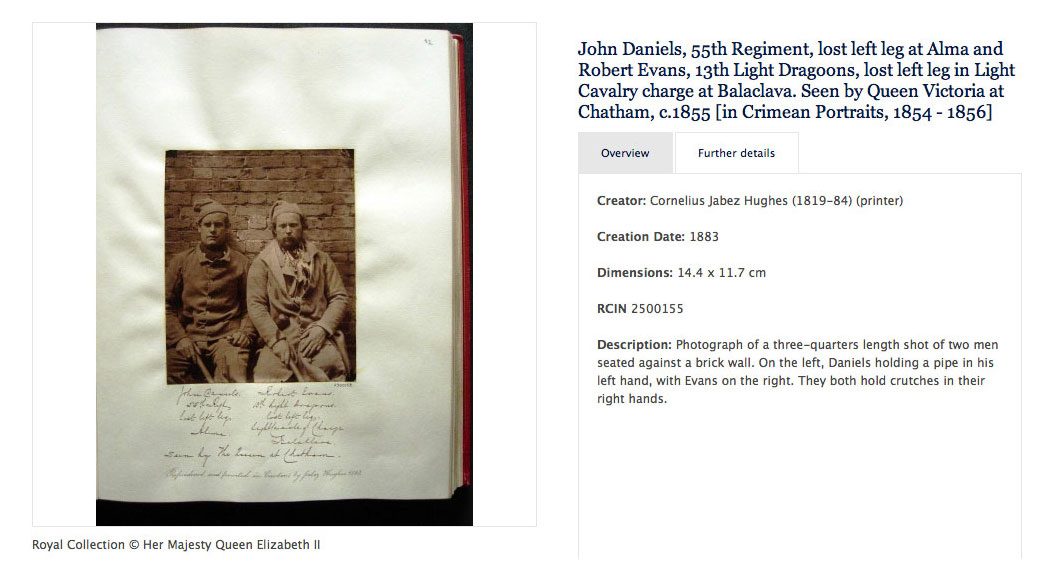 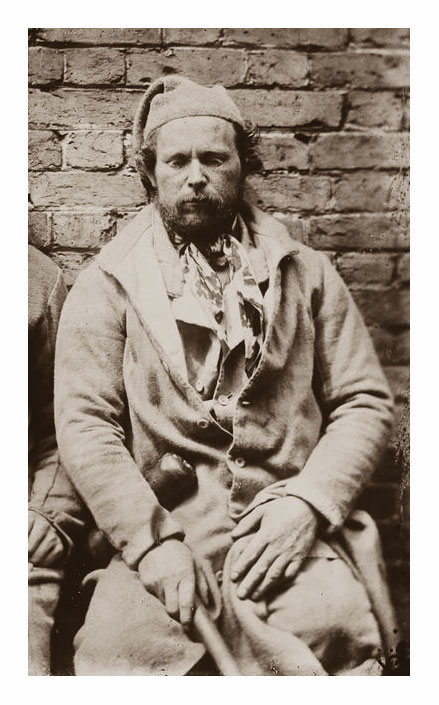 Robert Evans, photographed with John Daniels, 55th Regiment. Both had lost their left legs. Queen Victoria asked for photographs to be taken.

(Click on images to enlarge. The originals can be viewedhere)

We report that Robert Evans, of Birmingham, and late of the 13th Light Dragoons, who lost a leg in the Light Cavalry Charge at Balaclava, has been told that the Queen has declared that should any of her gallant soldiers need assistance due to wounds received, he was to be sent to London immediately in order that he might be supplied with an artificial limb at the Queen's expense. The soldier gladly obeyed the command of his sovereign and is in instant expectation of the Royal gift.

In theBirmingham Daily Post, 2nd of January 1856, appeared the following:

Extraordinary injuries received by a soldier

Amongst the number passed as "unfit for further service" held recently at the Brompton Barracks at Chatham, was Robert Evans of the 13th Light Dragoons, who has been at the Hospital nearly twelve months, and had received his injuries in an extraordinary manner.

In the Charge at Balaclava a shell entered the chest of his horse which rolled it completely over, falling upon Evans when the shell burst inside the animal and tearing it open from the shoulders to the hindquarters, the weight of the animal nearly causing suffocation whilst in its death throes and inflicting serious contusions upon the legs of Evans, who would have expired had not a man of his troop and two Lancers released him.

Her Majesty has evinced great sympathy for this youth and his photographic likeness was taken by her special command.

Near escape for a charger

At a medical board held yesterday at Brompton, among the number passed as unfit for further service was Robert Evans, 13th Light Dragoons, a youth who has been in hospital nearly 12 months, and received his injury in an extraordinary manner.

In the charge of Balaklava a shell entered the chest of his horse, which rolled completely over, falling upon Evans, when the shell burst inside the animal, tearing it open from the shoulder to the hind-quarters, the weight of the horse nearly causing suffocation, while its death struggles inflicted severe contusions on the legs of Evans, who would soon have expired had not a man of his own troop and two lancers released him.

Her Majesty evinced great sympathy for this youth, and his photograph likeness was taken by her special command. [Tony Margrave Newsletter 55, Jan 2014.]

Discharged from the Chatham Invalid Depot on the 8th of January 1856:

"Found unfit for further service. Disabled from the service, having suffered amputation of the lower left extremity from a severe contusion of both lower extremities by a horse which was killed under him having fallen upon him. The right leg is quite recovered and the left has full use of it."

Conduct: "good". Not in possession of any Good Conduct badges.

Aged 21 years on discharge. Awarded a pension of 8d. per day.

He said he intended to live in Birmingham after discharge, but he transferred to the West London Pension District on the 30th of April 1857.

It would be a good idea to look more closely at the Chelsea documents. [PB]]

Admitted as an In-Pensioner at Chelsea Royal Hospital on the 1st of May 1876. He then gave his age as 42 years, and stated that "his wife would be able to support herself by her own labour."

[PB, March 2017: This appears to be the Robert Evans shown here, who probably is not our Robert Evans. Also, the page as whole may not be reliable.]