[PB, March 2014: It is as yet impossible to view images the Scottish Census entries online, and transcriptions are not always accurate.] 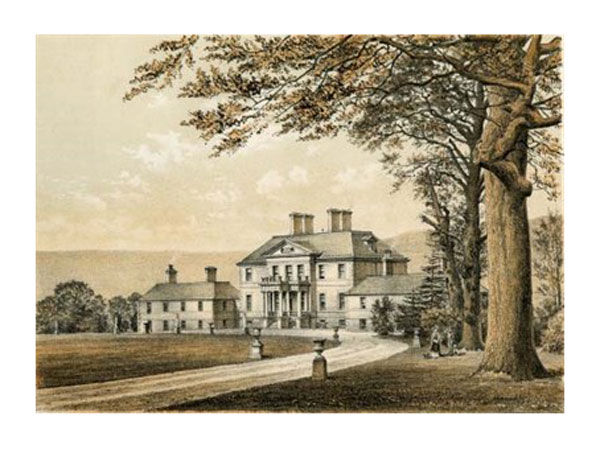 Strathleven (formerly Levenside) House, 1879. James Duncan was working with his father here as a gardener in 1841, shortly before he enlisted.

[PB, March 2014: There is a brief account, with images, of the history of the Levenside (later called Strathleven) estate here (http://www.west-dunbarton.gov.uk/leisure-parks-events/tourism-and-visitor-attractions/museums-and-galleries/collections/buildings/castles-and-country-houses/castles-and-country-houses-vale-of-leven/strathleven-house/ (accessed 7.3.2014)). After a considerable period of decline, and extensive fire damage, the house was refurbished in 2001 as business premises.]

In 1846 he was Mounted Orderly to Colonel Sir Charles O'Donnell.

Embarked for India from Cork aboard the S.S. "Great Britain" on the 8th of October 1857.

The musters for July-September of 1858 show no particular service movement during the whole of this period.

In action against the rebels at Zeerapore on the 29th of December 1858 and at Baroda on the 1st of January 1859.

Appointed Fort Major, Edinburgh Fort, on the 4th of July 1873.

Entitled to the Crimean medal with clasps for Alma, Balaclava, Inkerman, Sebastopol, and the Turkish medal. Also the Mutiny medal without clasp.

Awarded the Sardinian Al Valore medal. The citation for the medal reads:

"Served in the Eastern campaign of 1854-55 up to the end of the war, and including the affair of the Bulganak, the battles of the Alma, Balaclava (horse killed) and Inkerman (horse killed). Also the Siege of Sebastopol. Was never absent from the Regiment."

Also awarded the 5th Class Order of the Medjidie.

Duncan was also recommended for the award of the Legion D'Honneur, but was unsuccessful. A Confidential Memo from Horse Guards dated the 31st of December 1855 stated:

"It being intended to distribute a certain number of Decorations of the French Legion of Honour to Non-Commissioned Officers and men of the Cavalry Regiments they have been proposed as the most deserving of the Fifth Class."

The Memo ended with the request that seven further names of N.C.O.s or Privates as considered most deserving be transmitted as soon as possible. In answer to this the Commanding Officer of the regiment sent the following:

Sir, - In compliance with the confidential letter dated 24th December 1855 directing me to send to the Brigadier General Comg. the Cavalry the name of that person in this Regiment including all Ranks (with the exception of Lt Colonel prior to 25th of Octr. 1854, of Officers. N.C. Officers and Privates whom I consider most entitled to distinction for 'distinguished prowess in conjunction with our Allies', I have the honour to bring to your notice Cornet James Duncan who was present at the Alma, Balaclava (horse killed) and Inkerman (horse killed), also at the Tchernya. This Officer has never been absent from the Regt. since it landed in the Crimea.

I have the honour to be, Sir,

Your most Obedient Humble Servant,

Extract from an unknown source published in 1856:

"At the time of the proclamation of peace an order was given for all the soldiers of the regiment who had been out on duty during the whole of the campaign to parade on the square. Out of the 300 men of the 17th Lancers who left England, only 25 non-commissioned officers and men answered to the muster call, together with Adjutant James Duncan, who was the only officer of the regiment out during the whole of the time."

James Duncan appears on a group photograph of a number of 17th Lancer officers said to have been taken in 1856. [Image to be uploaded.]

The 1881 Census shows him as aged 58, a Major. Rtd. List, 19th Hussars, born in Scotland, with his wife Caroline, 54, born Gatton, Surrey. They were probably living in a flat or apartment since there were at least 8 others, listed in a separate household, in this building.

Extract from the Surrey News for the 2nd of June 1883:

"Died on May 28th, at Earlswood Road, Reigate, Surrey, Colonel Duncan (late 19th Hussars) in his 60th year, of heart trouble. He leaves a widow to lament his loss. Friends will please accept this, the only intimation."

The records of the Reigate and Banstead Cemeteries Department show that he was buried in the Cemetery of St. Mary's Church, Chart Lane, Reigate (grave number W8188), on the 2nd of June 1883. His wife, Caroline, was buried in the same grave on the 23rd of April 1908, aged 83 years.

[The EJBA contains a photograph of the gravestone, to be uploaded. The stone, once erect, has now broken in two, most of it being face downward. All that is readable on the smaller part is "James Dunc---" and the top of the next line down which cannot be read.]

Arrears of pension were paid to his wife, Mrs. Caroline Duncan. In his will he left his personal estate of £1,417 to his widow.

[RM: His wife Caroline Duncan appears in the 1901 Census as a "Pensioner" aged 74, living in Reigate, Surrey.]

[PB, September 2011: Matthew Perry, his "great-great-great-nephew", is writing a humorous and informative blog and FaceBook page devoted to James Duncan, and will shortly publish an illustrated book ( A Professional Soldier: A book tracing the rise from Private to Colonel of 17th Lancer James Duncan). Extracts, and information about ordering the book, can be found in both places.]