Discharged, "time expired", from Hounslow on the 1st of October 1864.

Entitled to the Crimean medal with clasps for Alma, Balaclava, Inkerman, Sebastopol and the Turkish medal. His name is found at the very end of the "Balaclava" roll.

His name appeared in the 1877 list of the Balaclava Commemoration Society as a Committee member, but he is not on the 1879 revised list.

Attended the Annual Dinner in 1899.

Eighteen months after leaving the army, Alfred Deason found work at the Poplar Union Workhouse, in East London, of which he became Master for many years. He became the subject of a number of court cases and enquiries and eventually resigned. 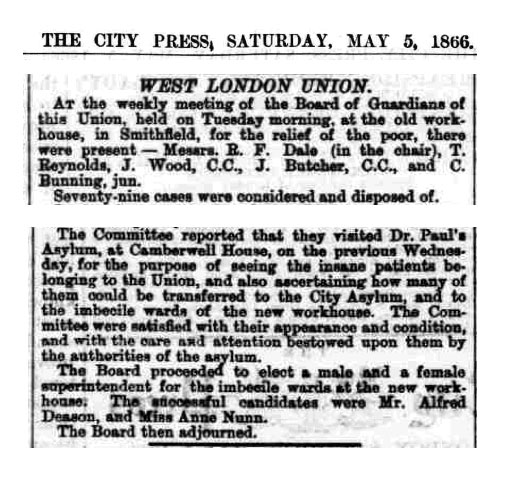 In 1866, Alfred Deason became the superintendent of the "imbecile wards" of the "new" Poplar Union Workhouse.

[RM, Jan 2014: What a place to manage! I have added a number of newspaper articles about Alfred Deason's career as Workhouse Master. His story is so much a part of the stereotypical Victorian pathos/tragedy of the workhouses, you could write a whole book on him. It is interesting that he was an initial member of the Balaclava groups, but ceased involvement and only resurfaced later in the century. From his attendance of a later dinner (1899), and his initial committee membership (1877), I would consider him to be a Charger - his non-appearance in-between may be attributable to his onerous Workhouse duties. In any case, by this association he wouldn't have been much thought of by his peers in the BCS.]

[PB: Jan 2014: For a detailed account of developments in Poplar, see Peter Higginbotham's indispensable website: http://www.workhouses.org.uk/Poplar/, from which the following is taken:

"From 1871, the Local Government Board supported an experiment whereby Poplar workhouse admitted only able-bodied paupers who would be subjected to a 'labour test' - performing hard manual labour in return for a subsistence allowance for their families - together with strict discipline and the most basic of diets. Any spare capacity was offered to other metropolitan unions and parishes.

The scheme proved to be effective with an "Order for Poplar" proving a strong deterrent to able-bodied applicants. However, such Orders increasingly came to be used by unions wishing to get rid of undesirable or troublesome applicants. This could include the aged and physically defective as well as the able-bodied. As early as 1873, the workhouse Medical Officer was complaining of the numbers of inmates who were not able-bodied. In 1880, 235 of the 1284 men admitted to the workhouse were aged over sixty.

During this period, Poplar had an arrangement with the adjacent Stepney union to accommodate its other classes of inmate, with the aged and infirm going to Stepney's workhouse at Bromley, and the sick to the newly opened Poplar and Stepney Sick Asylum. The 'Poplar Experiment' continued until 1882 when the demand for accommodation for increasing numbers of Poplar's own sick and infirm led to the workhouse reverting to the union's sole use...

By 1889, the workhouse was again admitting the aged and infirm and rising numbers necessitated the building of two additional accommodation blocks and an extension to the dining hall. Further additions were made in 1893 and again in 1901, resulting in the the site being described in 1903 as 'a veritable small town'."

The 1881 Census shows Alfred Deason, aged 45, as the Master of Poplar Union Workhouse. Interestingly, he was born in Poplar. He is shown with his wife Annie, and four children aged 10 to 4 years. 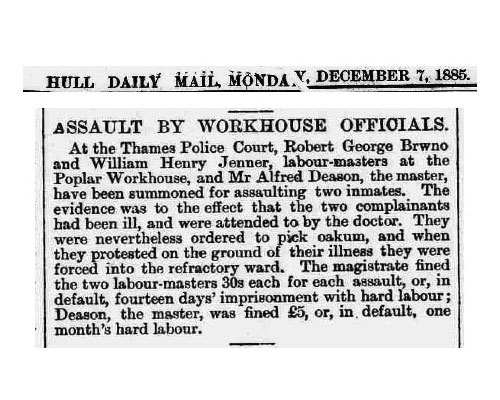 In 1886, Alfred Deason was fined £5 for an assault on two sick inmates - he and others had tried to put them to work picking oakum, and punished them when they refused.

By the time of the 1891 Census he was still the Workhouse Master, but had remarried. His second wife is shown as Mary, aged 49, born Isle of Man, the "Matron of the Workhouse".


In 1894, as a result of what newspapers called the"Poplar Workhouse Scandal" (in which he was principally accused of failing to provide clothing to inmates), he was forced to resign. It is interesting to notice the involvement ofGeorge Lansbury, future Leader of the Labour Party, in developments. 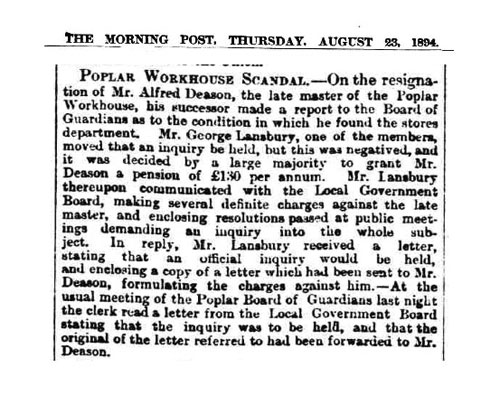 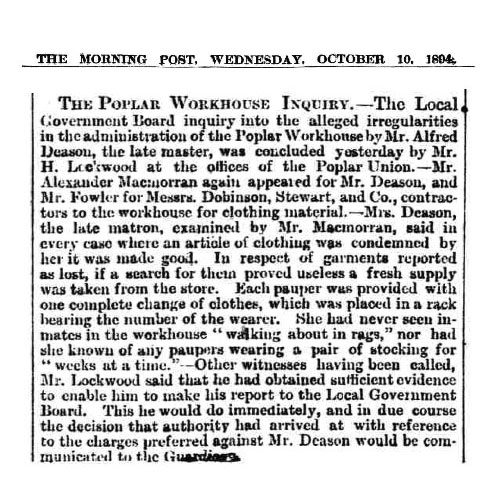 He is shown as "Retired Workhouse Master".

A son from the 1st marriage was also shown.

Census information, and registrations of Alfred Deason's marriage, children's births, and a number of deaths were kindly provided by Chris Pool.