In the 1841 Census for Market Wickham, Suffolk, a three-year-old Frederick was living with his mother, Sarah, aged 25, and father, John, an auctioneer [& accountant?], also 25. A brother and sister are also shown, and two others.

All born in Suffolk.

In the 1851 Census, Frederick, was living with his father, mother and six brothers and sisters. Although only 13, he was described as an "Attorney's Writing Clerk".

Sent to Scutari on the 25th of August 1855, invalided to England on the 6th of October, and joined the Depot on the 6th of November 1855.

Served with the force under the command of H.E. the Commander-in-Chief and Lucknow and with that under Sir Janes Outram at Alum Bagh (1857).

Appointed to Pay-master Sergeant on the 1st of December 1858.

Tried by a District Court-martial on the 1st of September 1861, reduced to Private and marked with the letter "D".

He was also imprisoned 1st of September - 3rd of November 1861 and to forfeit his previous service of 5 years 249 days. This service was restored by War Office letter, dated the 6th of February 1867.

Re-engaged at Dublin for a further 9 years 232 days service.

Transferred to the Army Service Corps, as a Corporal, on the 14th of February 1870.

By 1871, FD was married with two children. They were living in the home of a Margaret Hegarty, 58, Annuitant, and her two daughters, both in their twenties.

Discharged from the Royal Victoria Hospital, Netley, on the 27th of March 1877, as "Free to pension, on completion of 21 years service."

Conduct: "very good". Would, if not promoted, now be in possession of two Good Conduct badges. Once tried by Court-martial.

However, in 1881 Frederick Dallinger is again shown in army service, as a "Barrack Serjeant", aged 43, living in Horfield Barracks, Bristol, with his wife, Adelaide, 32, and six children: two daughters and four sons.

Adelaide B Dallanger, 12, b. Ireland. 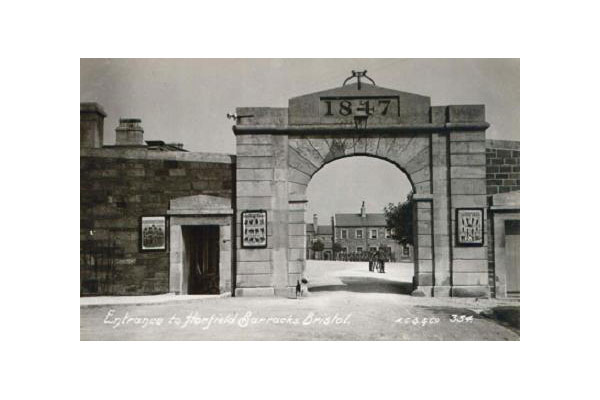 Entrance to Horfield Barracks, Bristol. Built 1843-7, in reaction to the Bristol Riots, it could accommodate four infantry or two cavalry regiments.

Documents confirm the award of the Crimean medal with clasp, Turkish Medal and the Mutiny medal with two clasps.

Not recorded by Lummis and Wynn.

They had been married for 43 years and had 10 children born alive.

A granddaughter and a boarder are also shown.

Registrations of deaths, and Census information for 1891-1911, kindly provided by Chris Poole.