IN PROGRESS - NOT FOR PUBLICATION 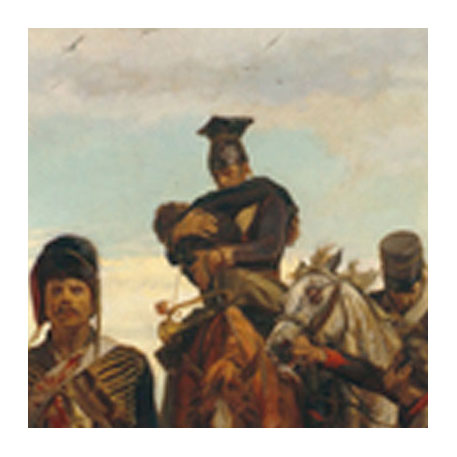 Generally referred to as "Billy" Brittain.

His father, No. 10 William Brittain, was born in the parish of St. Michael's in Dublin and enlisted there on the 2nd of February 1814 at the age of 16 years. He was 5' 7" in height, with a fair complexion, blue eyes and brown hair, and his trade had been that of a shoe-maker.

Made Corporal in June of 1823 and Sergeant in September of 1827, he was reduced to the rank of Private by a Regimental Court-martial on the 25th of November 1829 for "behaving in a manner un-becoming to a non-commissioned officer" - and was found "Guilty."

He was again tried by a Regimental Court-martial on the 25th of May 1840 for "Un-soldierlike conduct in being drunk when conducting two horses belonging to Captain Bourchette, to whom he was a batman." Found "Guilty" and sentenced to 10 days "solitary confinement."

Promoted to Corporal again in March of 1845 and finally discharged at Dublin on the 12th of November 1849 at the age of 51 years 9 months.

"He is now permanently incapacitated for the duties of a dragoon by chronic rheumatism and impairment of his strength and activity from age and length of service and not the result of intoxicating liquors and other vices."

Conduct and character: "good". He was in possession of four Good Conduct badges. He died in the Dublin Pension District on the 6th of November 1873.

Frederick Brittain, William's brother, enlisted in London on 27th of June 1838 and appears on the musters of the 17th Lancers at Cahir throughout the Crimean War. He was discharged at Dublin on 12th of January 1857 after 18 years' service. He died in Dublin on the 13th of May 1857. The Burial Records of Arbour Hill Cemetery show that he was buried there on the 15th of May 1857 at the age of 32 years, the cause of his death being "General Debility". No trace can be found that Frederick Brittain ever served in the Crimea.

Reduced to Private by a Regimental Court-martial on the 1st of November 1850.

As Orderly Trumpeter to Lord Cardigan, he was severely wounded-in-action at Balaclava, and sent to Scutari on the 26th of October 1854.

Died "of wounds" at Scutari General hospital on the 14th of February 1855.

Died "of wounds" incurred in the Charge at Balaclava, 25th October 1854, at Scutari General Hospital on the 14th of February 1855.

William Brittain and the sounding of the "Charge" at Balaclava

William Brittain is presumed to have sounded the "Charge" at Balaclava. This story has been hotly denied by 1631 William Pennington, 11th Hussars, and others, but it is equally supported by other sources - an argument that has been a topic of conversation and letters to newspapers ever since. (See copies of articles and letters in the 17th Lancer file and "Scrapbook.")

Brittain's father (also named William) and brother (Frederick) were both at one time in the 17th Lancers, the former for 37 years and the latter for 18 years. (See copy of a pamphlet giving details of this and the service of other members of his family in the "Memoirs" file.)

From a letter written from Scutari by a Mrs. Farrell:

"The Trumpeter was a most pitiful case, he begged that his bugle should not be taken from him, or out of his sight. Colonel [sic] Cardigan spent half-an-hour with him, soothing him. He is lying on some plank board and blankets... He belongs to the 17th Lancers and his name is Britain. The Sergeant of the 17th calls him "Billy" and keeps telling to buck up and get out soon to sound another "Charge". But there never was any hope for him..."

In his memoirs, 870 James I. Nunnerley, 17th Lancers states:

"The bugle, which had been holed by a Russian Cossack, was battered and bent. I got the bugle out from under William Britain's body after placing him on a stretcher; the cord was under his back and to remove it would have given him great pain, so one of the men drew his sword and cut the lines which were under his back, from the bugle."

Sarah Anne Terrot, a Sellonite Sister who went out with Florence Nightingale to the Crimea, possibly refers to WB in her book, "Reminiscences of Scutari Hospitals in the Winter of 1854-55":

"Lancers of the 17th. - young innocent looking faces - the first was a handsome youth, badly wounded in both arms and leg in that disastrous charge. A large ball was extracted from his thigh after it had lain there for almost three months and though for some time he appeared to be doing well, his appetite failed and he died, in fits, after four months severe suffering."

These details could imply that this man was, perhaps, Brittain.

The bugle itself remained in the family until the beginning of this century, when it was sold privately to the present owner's father (at that time, a Mr. J.B.H. Baker.) It was offered for sale by auction at Glendining's, Regent Street, London, on the 3rd of November 1905, but was not sold. In the 1920s it hung, with other trophies, on the wall of Mr. James Baker's public house, "The Percy Arms", in Newcastle.

It was again auctioned at Sotheby's on the 20th of April 1964, and fetched £1,050. It was bought by the actor Lawrence Harvey, and others, and later presented to the Regimental Museum of the 17th/21st Lancers at Belvoir Castle. A picture in the "Daily Telegraph" of the 21st of April 1964 shows Bandsman Costen of the regiment sounding the bugle. (See copy of this picture in the 17th Lancer "Scrapbook" and of the bugle in the 17th Lancer files)

Also sold with the bugle was a sworn statement by James Mustard of the 17th that he had been in hospital at Scutari with Brittain and in a letter he refers to his death, not from the result of being shot in the groin, or the removal of a piece of canister-shot from his back, but from bed-sores.

A letter, also included, was from William Brittain's brother, Frederick, dated the 3rd of January 1856, in which he refers to claiming the trumpet [sic] from Brighton Barracks, the 17th Lancers (his own regiment also) having returned there from the Crimea, in order to send it to their father, Corporal William Brittain, formerly of the 17th Lancers, but at that time an Out-Pensioner of the Royal Hospital at Chelsea. (The 17th Lancers had, in fact, gone straight to Ireland from the Crimea, but there was a Depot at Brighton until June of 1856.)

On his father's death in 1873 the bugle was left to the third son, Henry (Frederick having died in 1857). When Henry died in January 1881 the bugle passed to his wife, Eileen, and on her death to a daughter of the same name. It was this daughter who sold it to the father of Mr. James Baker in 1901.

(See also the record of 870 James I. Nunnerley, 17th Lancers, for a different story regarding the bugle.)

[1980s] Descendants of Henry Brittain currently reside in the Newcastle area of England and Dublin, Ireland.

Lady Butler, "Balaclava" or "Return from the Charge"

Billy Brittain is said to have been pictured (pieta-like) in the arms of his fellow-trumpeter 476 John Brown, 17th Lancers (significantly, a very much older man) in Elizabeth Thompson, Lady Butler's "The Return from the Charge". Notice the trumpet hanging beneath him.

For further information, or to express an interest in the project, please email the editors, Philip Boys & Roy Mills, via info@chargeofthelightbrigade.com